The Hills – surely one of New Zealand’s best Golf Courses

Firstly The Hills in Queenstown, New Zealand is not cheap. At $500 for a round- it’s more than some people pay for a year of golf. And because ‘Mirror’ and ‘Fade’ were guests at this year’s NZPGA- we weren’t paying anyway. However, if I did have a lazy $500 and I was a golf tragic- I’d say it was well worth it. 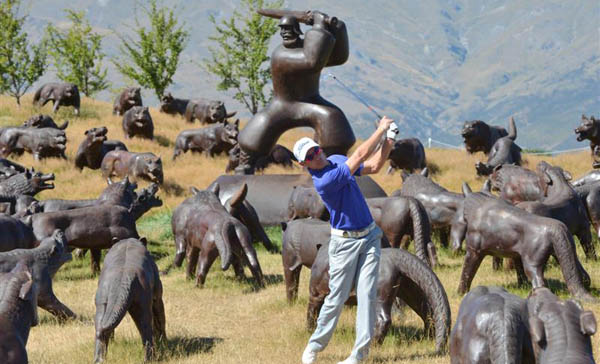 We touched down early afternoon from Sydney direct to Queenstown. First time I’ve been there in summer for over 30 years- but still just as spectacular. A quick check in at Millbrook Golf Resort- another amazing spot but I’ll save that for another time- and we found ourselves on the tee at about 3 p.m. Not a problem down there of course, it’s light till 9 in summer. With the course set and in stunning condition for the PGA- we were like kids in a lolly shop. Back tees, groomed fairways, table top greens. I had to keep looking round wondering when someone would tap me on the shoulder and ask me what the hell I was doing out there.

We were a bit rushed and a little pre occupied with the week ahead but we still played some reasonable golf with Mirror taking the honours. But in some ways golf was almost an afterthought. The Hills is a stunning golf course- Sir Bob Charles considers it. “The best golf course in New Zealand”.

Even the story of how it evolved is the stuff of legends. Jewellery Magnate, Sir Michael Hill relates a wonderful story – go check it out at www.thehills.co.nz

Sir Michael’s son Mark is a sculptor and he has a workshop on the course and several pieces on the course are his- as are his three Maori Chefs at Queenstown Airport. The art on the course is amazing and at times surreal. Yet it adds a feel I’ve never felt before on a golf course and one of the reasons I’m still raving about the place.

The rest of the week at The Hills was frantic as we filmed and interviewed stars and celebrities from all over the world. But that quiet little 4 hours Mirror and I had alone on the course is something I’ll never forget and another reason why I love this game.

To watch the full episode from The Hills click here.