The July 1949 issue of PGA Monthly was titled “Tough but Fair” – that’s Ryde Parramatta. I must say this was a very appropriate description of what was about to unfold.

I’d played Ryde Parramatta on two occasions before but was particularly looking forward to this outing.

Located on Victoria Rd just north of the geographical heart of Sydney, the 5899 metre, par 71 championship layout is possibly the only course in Sydney with a view of the great Olympic Stadium at Homebush.

Today was going to be particularly special because my golfing buddy (or should I say “hacker buddy”) Shaun “Fade” Fay and I were going to be playing with a former board member and legend of the club Allan Teasdale who has played at Ryde Parramatta for over 54 years, as well as their newly appointed Business Development Manager Charles Watkins who incidentally can tell you who won the British Open and at which course as far back as can be remembered – now that’s no mean feat. With those lads in our group there were sure to be some great stories. 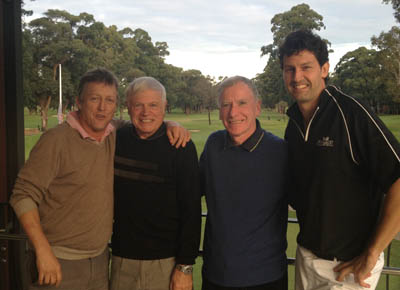 Charles had forewarned me that Ryde Parramatta is highly under stated, and definitely under-rated. Seems a common theme among golf courses and even more common coming from someone whose job it is to promote the club, so I thought I would leave my judgment until after the round with the hope of being pleasantly surprised.

After deciding on the wager for the day we all teed off with great excitement for what lay ahead. I must have been a little bit too excited as I hooked my initial drive onto the adjacent 9th fairway. Perhaps this was not going to be my day.

Without a shot to the green and taking Allan’s advice I nudged my ball back onto the first fairway where I subsequently played a beautiful shot across the creek (alteast it looked beautiful off the club) onto the back of the top to bottom facing green. I managed to tame the rather large downhill green and get away with a respectable 2 points.  Charles on the other hand started with a very well constructed par. Luckily for me he was on my team.

After only the first hole I could already see how well groomed the course was and how the green keepers had it looking a picture.

Nothing much happened for me from this point on until we reached the approach to the par five 5th, a magnificent golfing hole with the Southern Hemisphere’s largest protection fence guarding the right side of the hole from being attacked by the neighbouring houses. I was 120 metres out with an uphill green and a huge tree between me and the flag. Armed with my nothing ventured, nothing gained attitude I hammered by 8 iron directly through the tree expecting it to drop back down in front of me.

Miraculously (despite Charles’s  and I’s amazement) the ball somehow went through the only gap in the tree and landed 8 foot from the pin. Perhaps this was going to be my day after all.

For average players like me Ryde Parramatta is definitely a good course to lay-up as, an aggressive approach to the greens could often be swallowed up by one of the well placed bunkers or multiple water features, not to mention the crows who stole Allan’s ball on the notorious 6th hole.

The 8th hole is a very well designed 302 metre, par four. It’s only a five iron from the tee (to avoid the creek 100 metres out) and a pitching wedge in to a dogleg right tabletop green but the beauty and architecture of the hole is very reminiscent of the great Royal Melbourne. What’s more I played two of my best shots all day and walked away with a very satisfying par for my efforts.

The 9th hole was not ideal for my man Shaun “Fade” Fay as it requires a draw around the imposing trees on the left of the tee and he subsequently sent his ball slicing through the trees on the right to the 8th fairway. In his defense he did manage to produce some magic to par the hole.

One of the real standout features of Ryde Parramatta is the abundant variety of wildlife present. It’s no wonder, when you see the amount of large dams, water ways and native bush available. Even the tee markers were an attractive part of the landscape for the cockatoos, as they happily chewed away on them whilst golfers were teeing off.

With Charles having an inspiring 20 points on the front nine we were 6 shots ahead (with 21 team points) in our quest to be champions for the day. Although I was not feeling that confident as we approached the hardest hole, the 383 metre, par four, right to left dog leg tenth. Having said that, we all played the tee shots perfectly, landing 140 metres out to the right of the fairway with a perfect, unhindered view to the green.

My next effort was my shot of the day sailing over the creek in front and through the keyhole (bushes on the left and large trees on the right) approach to the green and landing 10 foot to the right of the pin. This tied with the 13th as being my favourite hole of the day, as it’s always great to play the hardest hole well. I consequently missed my birdie putt but walked off very happily with a par for 3 valuable points.

In addition to Allan’s stream of history lessons and swag of humorous stories the most amusing part of the day was on the 320 metre, par four 13th. Shaun and I both played meticulous 250 metre drives to be within a wedge of the very picturesque bunker lined on the left and damn laced on the right green. Surely this would have to be one of the most scenic and natural ampitheatre holes anywhere in Australia and would certainly compete as one of the best gallery holes in the world.

My approach landed 6 foot from the pin and Shaun’s about 15 foot from the pin. What happened next was amusing to say the least. Shaun drained a putt that never looked like missing and proceeded to scream a huge “Yeeeees, get that into ya” as it went in the hole, much to the shock of both Allan and Charles who looked like two stunned mullets that had just jumped out of the dam beside us. Needless to say (with tongue firmly placed in cheek) I had to remind old “Fade” Fay that this was a private course and that this type of behaviour is unacceptable at such an establishment. Although he had the last laugh as I missed my putt and he walked away with the first birdie for the day.

Although it did not take me long to redeem myself on the 320 metre, par four 15th, with a great drive to 110 metres out, a beautiful pitching wedge into the green and an even better right to left, downhill putt for birdie. Surely Charles and I could not be beaten now?

The 17th and 18th holes at Ryde Parramatta are perhaps two of the most imposing holes in golf. A big call I know but the 17th, 163 metre, par three “Signature” hole is every bit as demanding as it looks. With a huge dam cutting the hole diagonally from front right to back left,  a huge tree at the front of the two tiered green and two precariously place bunkers on the right of the green you really have no option but to take a risk and go for the flag. I managed to make one of the bunkers on the right but laughingly did not take enough sand when hitting my second and sent the ball flying over Shaun’s head into the dam, much to the amusement of all involved. Luckily for me Charles drained his putt from 40 feet and we headed to the 18th one shot in front.

The 18th is just as imposing as the 17th – it’s a 532 metre par 5 with a double dog leg – right to left from the tee and  left to right from 150 metres out, into a green that is in front of the massive Clubhouse, which when full would be an ominous site for any aspiring golfer.

After a perfect drive from Charles and a wayward drive from me the nerves were kicking in. My second shot out of the trees just missed the roof of the other lads cart and landed 300 metres from the green. What happened next was a good summary of the day. I absolutely smoked my 3 wood to the left of the fairway to be 90 metres out, I then proceeded to over hit my approach shot and it appeared all hopes of a win were dashed. Luckily for Charles and I, I drained my 50 foot chip from off the green and we won the day – not before being given the nickname “FigJam” for being the jammiest player of the day.

After not only winning the individual event and the team event with my partner Charles, Ryde Parramatta reminded me why I love golf. With a great course, great weather, great company and very sporadically great golf it made for a very special day out.

To watch the full episode from Ryde-Parramatta click here.