Golf in the Vines

Home » Blog » Golf in the Vines 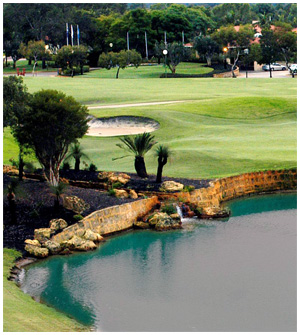 After a smooth flight to Perth from Sydney I grab the hire car and drive 30 minutes up the freeway into the famous wine region of Perth – the Swan Valley (atleast they call it a freeway, more like a country road it was that quiet) to one of Australia’s top Golf Resorts – The Vines Resort and Country Club.

The Vines has two courses – the Lakes and Ellenbrook, designed by Ross Watson and Graham Marsh, they really are the links courses in the bush and have staged some of Australia’ biggest tournaments (such as the Johnnie Walker Classic, Heineken Classic and for the ladies the Lexus Cup) and witnessed some of the world’s best players with the likes of Greg Norman, Fred Couples, Lee Westwood, Ian Poulter and a young Rory McIlroy doing battle.

Apparently John Daly, (believe it or not) ran around the course and completed his round in 2 hours and 8 minutes, threw his driver into the lake on 18 and jumped back on a flight back to the United States – all because he was not having a great tournament.

Upon arrival, the resort staff were very welcoming but not as friendly as the family of kangaroos on the first green at Elllenbrook. Kangaroos are everywhere at the Vines and for anyone new to Western Australia this is the ideal golf resort to showcase the bush and wildlife the region is famous for.

The real stand out for me about both courses was the size and undulations of the greens – on average they have to be some of the biggest in Australia and I am told on authority that four putts are very common.

Another notable stand out were the amount of bunkers – Often I would be hitting out of one bunker over another one before the ball reaches the green.

My favourite holes on the Ellenbrook course were the par 5 twelfth, it looks like something that should be in the Arizona desert with all its bunkers and blackboy trees which look like cactus’s.

The signature 8th, a short par 3 over water, surrounded by bunkers is very nice and the 18th is a great finishing hole that you do not want to be above the hole as the green rises 4 metres from front to back.

On the Lakes course the most notable stand out was having to shoo away kangaroos from the tees – the last thing you need is a dead kangaroo on your conscience – especially if you are having a good round.

The back nine holes of 14-18 are world class and the entire course feature Graham Marsh’s trademark rounded – clover leaf style bunkering. The 18th is reachable in two and has caught out many a golfer with the water in front of the green.

Overall living on-site at the Vines Resort and Country Club was a very enjoyable and relaxing experience and should certainly be on any golfers Western Australia golf bucket list.